The Poetics Research Centre has grown out of the ongoing collective and individual work and interests of its staff researcher Members. It has developed to include PhD students researching poetics and poetic practice as Associate Members.

To find out more, email poeticsresearchcentre@rhul.ac.uk and check out the centre’s other pages, including our new Poetic Practice Now showcase and archive.

Professor Redell Olsen is the current director of the RHUL Poetics Research Centre. She is the recipient of the 2020-21 DARE Art Prize, which included an open studio exhibition at the Tetley Gallery in Leeds of work made in collaboration Opera North and the National Science and Media Museum. Her publications include: Woolf/Apelles (Electronic Crinolines, 2019), Film Poems (Les Figues, 2014), Punk Faun (Subpress, 2012), Book of the Fur (Rempress, 2000), Secure Portable Space (Reality Street, 2004) and the collaboratively edited Here Are My Instructions (Gefn Press, 2004). From 2006 to 2010 she was the editor of the online journal How2 and published modernist and innovative poetry and poetics by women writers. Her work is included in the anthologies: Trenchart Monographs Hurry Up Please Its Time (Les Figues, 2015), Out of Everywhere 2 (Reality Street, 2015), Infinite Difference: Other Poetries by UK Women Poets (Shearsman, 2010) and I’ll Drown My Book: Conceptual Writing by Women (Les Figues Press, 2011). Her recent projects have involved texts for performance and film. 'The Lost Swimming Pool’, a site-specific collaboration that was commissioned by the Creative Campus Initiative (June 2010). She has published articles on Frank O’Hara, Abigail Child, on field recording and on the relationship between contemporary poetics, feminism and the visual arts. Her current research interests include ecology and the environment, film and performance. Redell Olsen’s film, Now Circa 1918, was shortlisted for an AHRC research in film award. Website: redellolsen.co.uk 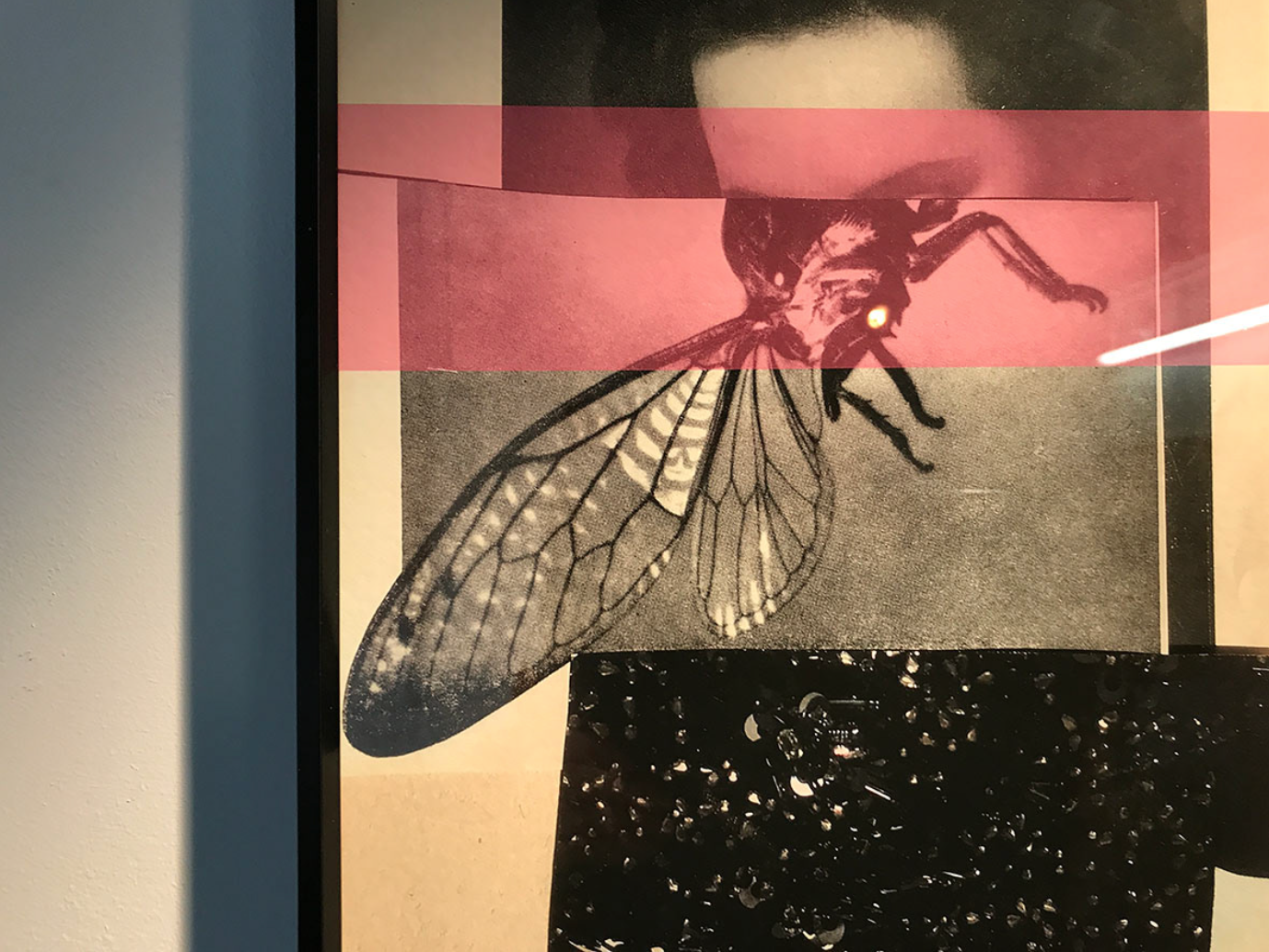 Collage/Mixed Media by Redell Olsen from Weather, Whether Radar: Plume of the Volants. Black and white photographs in a gallery frame, with top half of a woman’s face, close-up of insect with transparent wings, a horizontal pink band across where face and insect torso meet.

Professor Emeritus and Research Fellow at the Institute of English Studies

Professor Robert Hampson was formerly Professor of Modern Literature in the Department of English at Royal Holloway. He is currently Professor Emeritus at Royal Holloway, Research Fellow at the Institute for English Studies, University of London and on the faculty of the New School of the Anthropocene. He has been involved in the field of contemporary innovative poetry since the 1970s as editor, critic and practitioner. During the 1970s, he co-edited the magazine Alembic with Peter Barry and Ken Edwards. He later co-edited (with Peter Barry) the pioneering volume New British Poetries: The Scope of the Possible (Manchester University Press, 1993); and, more recently, has co-edited (with Will Montgomery) Frank O’Hara Now (Liverpool UP, 2010); (with Ken Edwards) Clasp: Late Modernist Poetry in London in the 1970s (Shearsman, 2016); and (with cris cheek) The Allen Fisher Reader (Shearsman, 2020). He has also published poetry in magazines, anthologies and booklets since the 1970s. Some of this work was collected in Assembled Fugitives: Selected Poems 1973-1998 (Stride, 2001). His best-known collection is probably seaport (Shearsman, 2008), while reworked disasters (Knives Forks and Spoons, 2013) was long-listed for the Forward Prize and, most recently, Covodes 1-19 was published by Artery Editions (2021). His poetry has been translated into German, Romanian and Italian. He taught with Redell Olsen on the MA in Poetic Practice at Royal Holloway and co-runs the Contemporary Innovative Poetry Research Seminar at the Institute for English Studies.

Reader in Poetry and Poetics

Dr Will Montgomery works on contemporary poetry and poetics. He is the author of Short Form American Poetry: The Modernist Tradition (Edinburgh, 2020), The Poetry of Susan Howe: History, Theology, Authority (Palgrave, 2010) and he co-edited (with Robert Hampson) Frank O’Hara Now: New Essays on the New York Poet (Liverpool UP, 2010). With Stephen Benson, he co-edited Writing the Field Recording: Sound, Word, Environment (Edinburgh, 2018). He has published many articles on contemporary poetry. He has a long-standing involvement, as critic and practitioner, in contemporary experimental music, field recording and sound art. Website: www.selvageflame.com

Dr Prudence Bussey-Chamberlain is the author of two books of poetry, Retroviral* (Veer 2018) and {Coteries} (Knives Forks and Spoons Press 2017), and the co-author of House of Mouse with SJ Fowler (Knives Forks and Spoons Press 2017). You can watch a video of the launch of Nemeses with SJ Fowler here. Her critical work includes two monographs, The Feminist Fourth Wave: Affective Temporality (Palgrave Macmillan 2017) and Queer Troublemakers: Poetics of Flippancy (Bloomsbury 2019). She is currently developing a project on Feminist Nostalgia in collaboration with Dr Elizabeth Evans and completing a poetry book inspired by Emily Dickinson's figure of Death. Website: www.prudencebussey-chamberlain.com

Tom Bailey is a poet and writer from London. He is currently doing a practice-based PhD at Royal Holloway, researching emotional detachment and flat affect in the works of contemporary poets like Emily Berry, Anne Carson and Denise Riley. His other research interests include: elegy, ventriloquism, surrealism, twinship, prose poetry, affect theory and queer theory. His poems have been published in Propel Magazine, bath magg, The Kindling, The Cormorant, Lighthouse Literary Journal, Hawk & Whippoorwill, The North, and the Munster Literature Centre’s Poems from Pandemia Anthology. In 2020, he was awarded a Robert Pinsky Global Fellowship. He is also a member of the Roundhouse Poetry Collective 2022-23. Find him on Twitter @TomBaileyBlog. 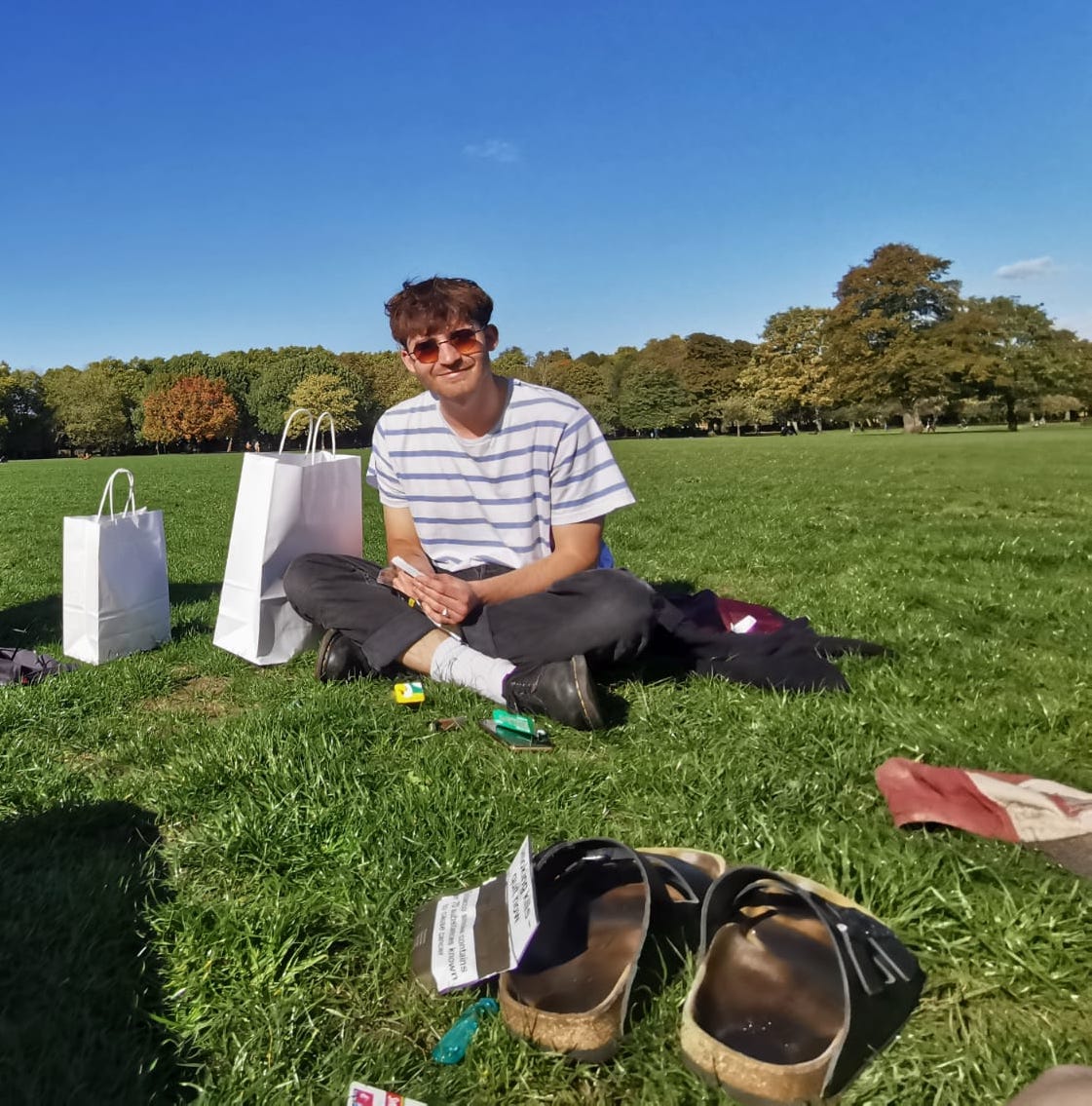 Sarah is a writer, academic, artist and editor (@Guillemot Press), who has published two full-length collections – Perseverance Valley (2019) and An Arbitrary Line (2018) – and several pamphlets, artists’ books and collaborations including like fragile clay (2018 and 2021), The Merits of Tracer Fire (2020) and A Confusion of Marys (2020). Sarah has performed her work at numerous festivals, reading series and conferences. Sarah is currently finishing a practice-based PhD at Royal Holloway on queer prayer and contemporary experimental practice. Sarah also teaches at the University of Plymouth and is a Visting Lecturer at Falmouth University. 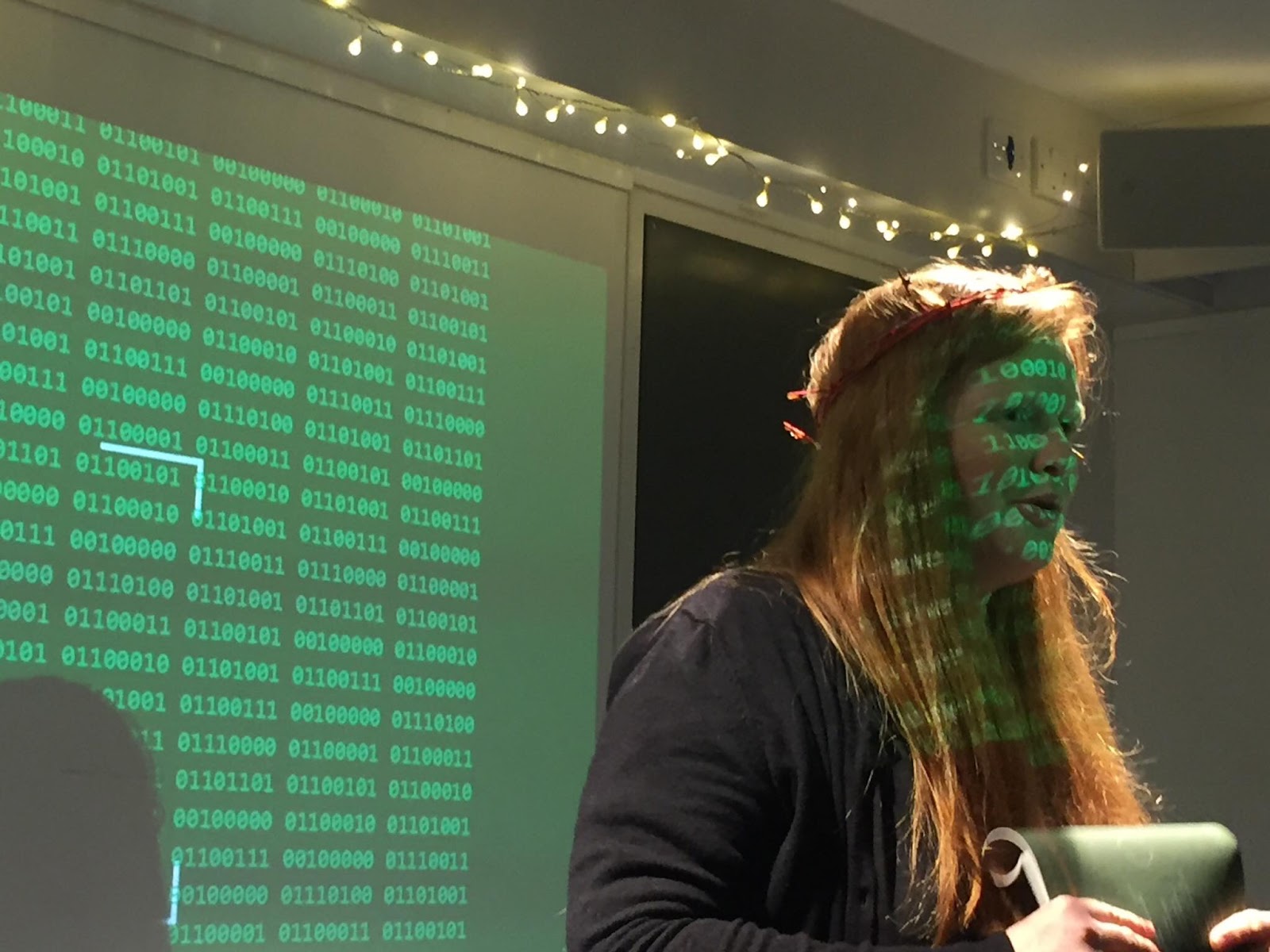 Image shows Sarah at the double launch of Perseverance Valley and Astra Papachristodoulou's Stargazing at the Poetry Society. Binary code from the book is being projected on to a screen behind and on to Sarah, who is wearing a starry Martian crown.

Rowan is a poet, composer and sound artist whose debut collection A Method, A Path is forthcoming from Bloomsbury Poetry in 2023. His most recent chapbook is The Last Verses of Beccán (Guillemot Press, 2019), which won the Michael Marks Award for poetry. He received an Eric Gregory Award in 2015 and a selection of his work appears in Penguin Modern Poets 7: These Hard and Shining Things (Penguin, 2018). Rowan was a Creative Fellow at University College London 2019-20 and he is currently completing his practice-based PhD research, Radical Encounters with the Early Medieval in Late Modernist and Experimental Poetry at Royal Holloway, University of London. Website: rowan-evans.com 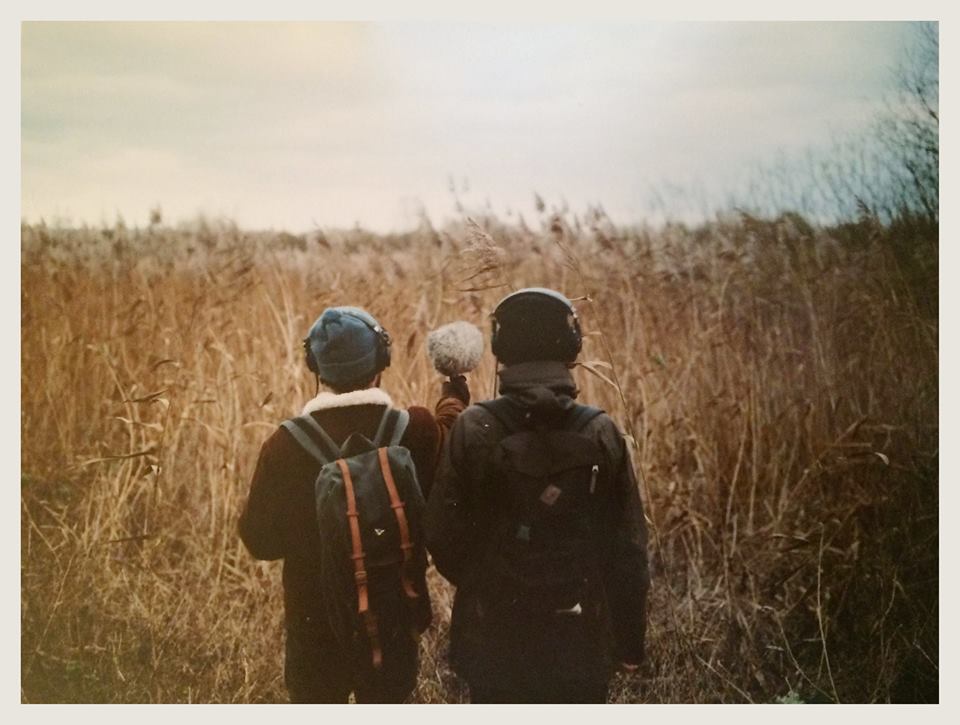 Image from the project Wulf, composed and written by Rowan Evans, shows two figures from behind with sound equipment, wearing headphones and holding a large microphone; they are walking through reeds as tall as they are.

Edwin (he/him) is interested in the new media poetics tradition, erasure poetry, procedural generation, newer materialisms, the history and mechanics of spaceflight, navigational tools, bestiaries, unusual portrayals of eating, experimental horror, post-classical physics, demaking, occult and solar literature, and executable texts such as videogames, cardgames, recipes, manuals and spells. He has published work with SHARKPACK, Burning House Press, Abridged, Sienna Solstice, Sidekick Books and Antiphon, among others. His ongoing projects include several decks of poetry cards and a novel-length work about a bird creature tasked with eating the inedible. His thesis is a verse-based response to NASA’s Golden Record and the Voyager missions. In daylight hours he writes videogame and technology criticism and journalism for places like Apollo Magazine, Wired, Edge and The Guardian. He tweets as @dirigiblebill and would love to hear from you. 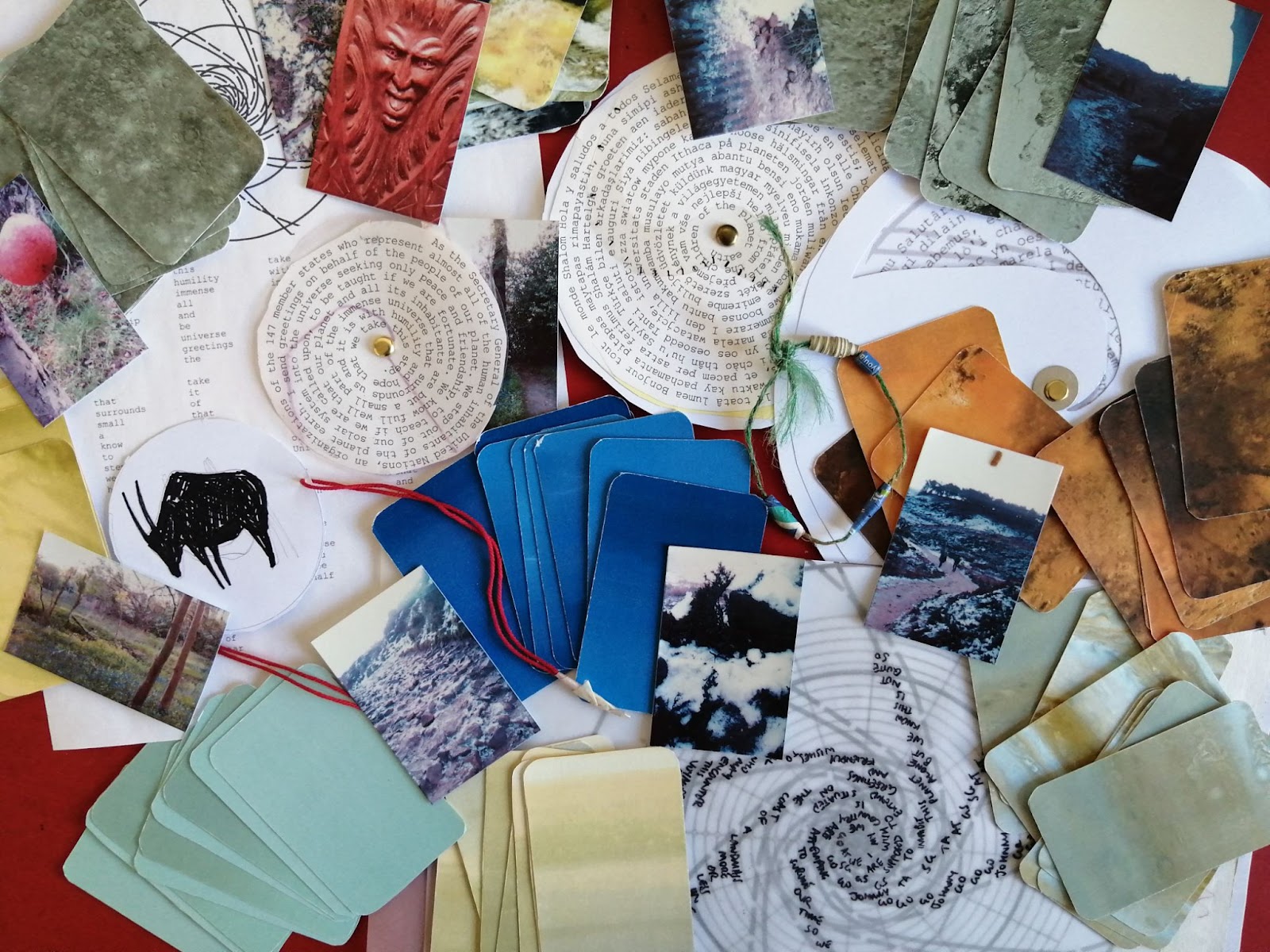 Image shows a spread of poetry cards and astrolabes by Edwin Evans-Thirlwell.

Caroline Harris is a writer, publisher and editor, and a Poetic Practice PhD researcher at Royal Holloway studying the poetics of deer, with a focus on the emerging field of Cute Studies. Her first pamphlet, SCRUB Management Handbook No.1 Mere, is held in the collections of the Bodleian Library and National Poetry Library, with language art from this residency with Singing Apple Press shown at The Plough Arts Centre, Devon. Limited-edition pamphlets Type Flight and Cut-out Bambi are produced through her own Small Birds Press. Material and object poetry includes ‘Clootie Ribbons [Rhodes series]’, an installation in the Text-Isles group show at the Art Park Gallery, Rhodes (September 2021), and ‘Clootie Collars’, exhibited on the Poem Atlas website. Poems and articles have appeared in anthologies, magazines and journals including Rewilding: An Ecopoetic Anthology (Crested Tit Collective), Finished Creatures, PERVERSE, The Phare and The Blue Notebook: Journal for Artist’s Books. She is co-organiser, with Dr Isabel Galleymore, of the seminar and reading series AWW-STRUCK: Creative and Critical Approaches to Cuteness. Twitter and Insta: @carolineyolande 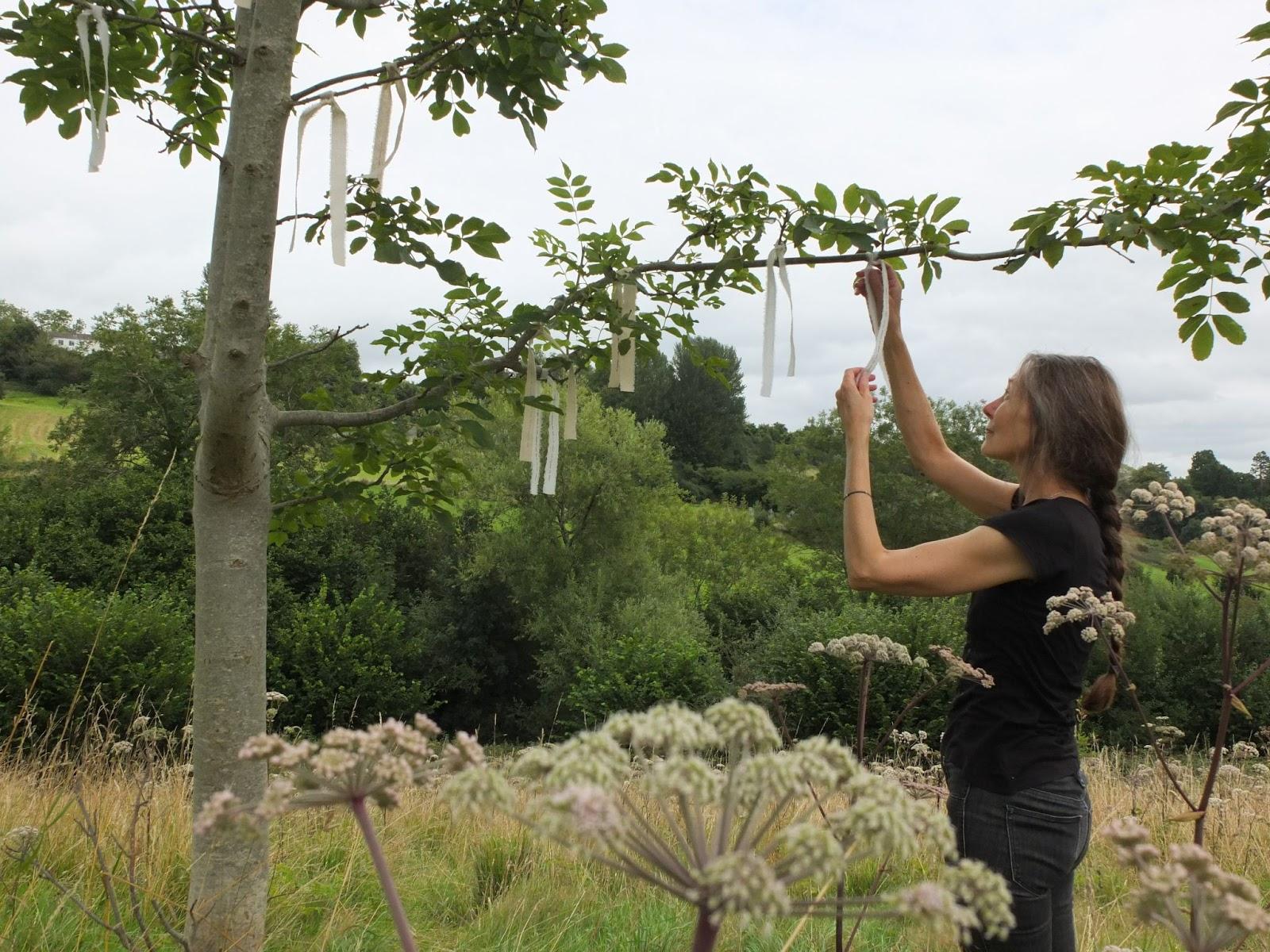 Image shows cream fabric ‘Clootie Ribbons’ being tied into a tree by Caroline Harris, with a green hillside behind and umbellifer flower heads in the foreground. Photo: Ethan Wilson.

Briony Hughes is a poet, visiting tutor, and Techne AHRC-funded PhD candidate based at Royal Holloway, researching hydropoetics, Kathleen Fraser, and Charles Olson. Briony also teaches on the Creative Writing MA programme at Brunel University. Her publications include Dorothy (Broken Sleep Books), Microsporidial (Sampson Low), and RHIZOME or TAPROOT (Paper View Books). She has two additional books forthcoming in 2023 with Hem Press and Broken Sleep. Her limited-edition artist's bookworks have been collected by the National Poetry Library, Senate House Library, and the King’s College London Special Collections. She is editor at Osmosis Press and a co-founder of the Crested Tit Collective, and a participant in the TECHNE Embodied Practice Group. Twitter: @brihughespoet 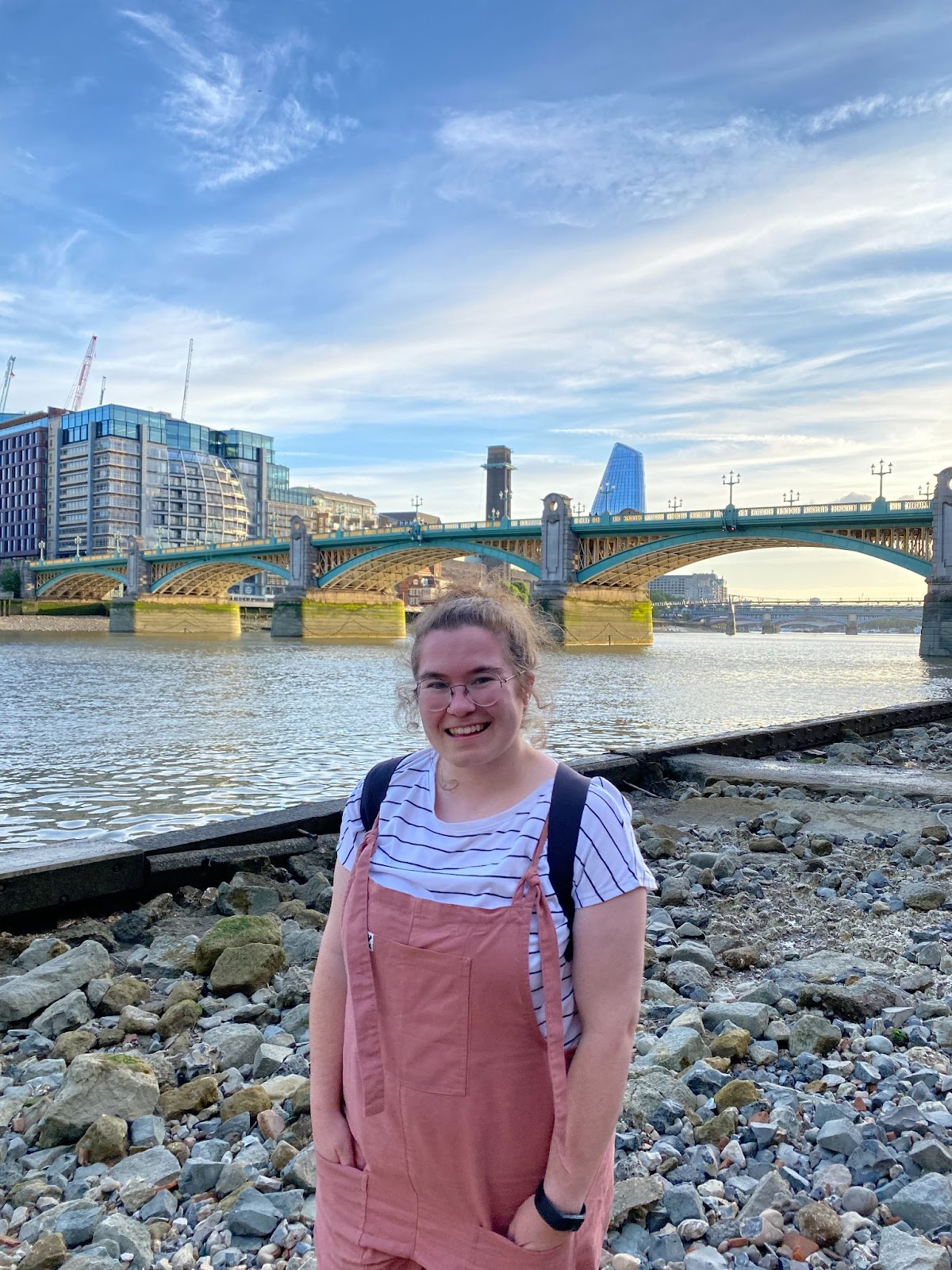 Image shows Briony standing on the Thames foreshore at low tide. She is wearing pink dungarees. A bridge stretches across the background of the image.

Karenjit Sandhu is a poet, artist and researcher with a PhD in prose poetry, archives, performance and art objects at Royal Holloway. Her poetry collections include Poetic Fragments from the Irritating Archive (Guillemot Press, 2022) and young girls! (the87press, 2021). Her poems are anthologised in Judith: Women Making Visual Poetry (Timglaset Editions, 2021) and Writing Utopia (Hesterglock Press, 2020), in addition to being published in Magma (2020), Digital Poetics (the87press, 2020), DATABLEED (2019), Para-text (2019). She has collaborated with the Institute of Contemporary Arts, Flat Time House and Camden People’s Theatre (London), Arnolfini (Bristol) and Galerie Eric Dupont (Paris). She has also written for The Blue Notebook: Journal for Artists’ Books. Her own artists’ books have been collected by the Tate Archive and exhibited at The Showroom (London) and Galerie éof (Paris). She has contributed to research on British artist John Latham in her essays: ‘Painting with Fire and Foam: The Daring Practices of Alberto Burri and John Latham’ for the exhibition catalogue Time {τ} and Eternal Life, and ‘Shifting Perspectives: the space, the work and the body’ for exhibition catalogue Red, Green and Yellow: John Latham, Tim Head, Bob Law, Liliane Lijn and Wolfgang Tillmans. 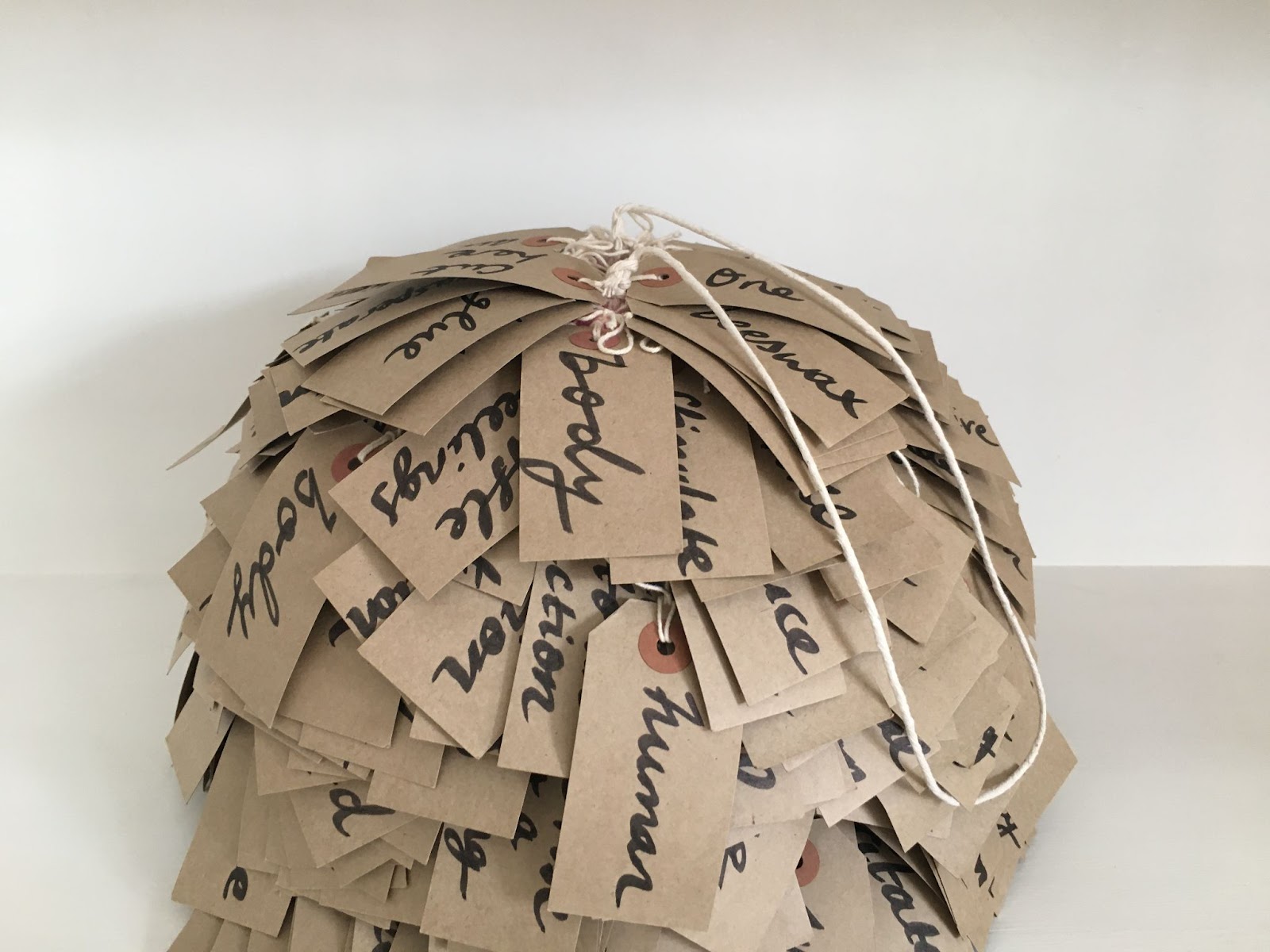 Image shows ‘Item 17’ from the Irritating Archive by Karenjit Sandhu, a cascade of brown luggage tags with words written on them.

Get help paying for your studies at Royal Holloway through a range of scholarships and bursaries.

There are lots of exciting ways to get involved at Royal Holloway. Discover new interests and enjoy existing ones

Heading to university is exciting. Finding the right place to live will get you off to a good start

Whether you need support with your health or practical advice on budgeting or finding part-time work, we can help

Discover more about our 21 departments and schools

Royal Holloway is a research intensive university and our academics collaborate across disciplines to achieve excellence.

Discover more about who we are today, and our vision for the future

Royal Holloway began as two pioneering colleges for the education of women in the 19th century, and their spirit lives on today

We’ve played a role in thousands of careers, some of them particularly remarkable